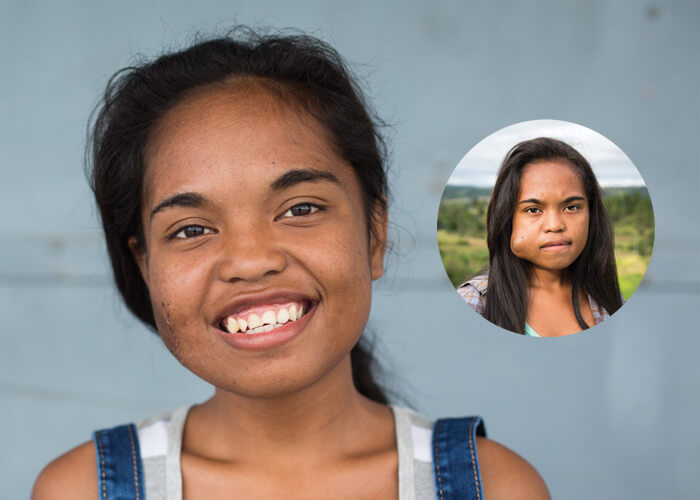 Viewed from the left side of her profile, Muriella’s natural beauty made her stand out in the screening crowd of over a thousand. With her trendy clothes, fashionable long hair and typically self-conscious 17-year-old manner, she could have been standing in a high school cafeteria line in any high-income country. But as soon as the right side of Muriella’s face became visible, the reason she was seeking surgery became obvious.

A decade ago, a cyst began to develop inside Muriella’s cheek.  Initially, she was not concerned about the small lump, but it continued to grow. Eventually, the tennis ball-sized growth made her the unwilling center of attention. Muriella was subjected to mockery from the very people she used to hang out with, and her teenage insecurity was exposed for all to see.

As the lump increased in size, it relentlessly forced her cheek outward. Going to high school became more and more traumatic for Muriella. In fact, she changed schools twice in three years because her classmates did not want to sit next to her or have anything to do with her.  When she came home after school, sometimes she would cry as she prepared dinner for her sisters and her mother.

The family struggles to make ends meet since Muriella’s dad passed away. Her mother works long hours in a factory to support her three daughters and to pay for them to go to school. They live in a small upstairs apartment with two rooms. In one room they cook, eat and sleep. In the other tiny room is a sofa, two chairs and an old television. On the bare wall hangs a poster of a pretty girl – a girl without a tumor. “I was hoping one day that would be me,” said Muriella.

Muriella is a dedicated student, and she nurtures a dream to study law. She is determined to advocate for the poor who are imprisoned and cannot afford legal representation. Her passion is to see justice provided for the defenseless.

But the relentless growth and the emotional issues it caused were reflected in Muriella’s failing important exams. Her hopes and dreams for the future were shattered. But even this was insignificant in comparison to the fear of what would happen to her if the facial tumor continued to grow.

Australian nurse Naomi Reid first encountered Muriella at the patient screening as she lined up in the early morning hours with hundreds of others, all seeking help. Naomi recalls the moment she told Muriella the longed-for news: that Mercy Ships would provide a free surgery to remove her cyst. It seemed as though a little bit of life was instantly breathed back into Muriella. She now clung to her hopes that had previously seemed hollow.

A new chapter of Muriella’s life began as she and her mother travelled to the coast to the Mercy Ship. Volunteer surgeons examined Muriella and reassured her, “We’re going to help you, so you can go back to school.”  A week later, after a CAT scan and a multitude of testing onboard the hospital ship, Muriella walked to the operating room to receive her free surgery. Nervous and excited, she realized this was going to change all her tomorrows.

The transformation in Muriella was dramatic and immediate. After the surgery she was eager to go back to school. She felt the same as everyone else and looked like everyone else. A light-hearted side of her personality that had been hidden for so long began to emerge.

Through a relatively small procedure, Muriella’s life story changed. Instead of a sad ending, she is beginning a new chapter full of hopes and dreams she can pursue.

Once again, Muriella is ready to sit her exams for university. Her vision to advocate for those who are treated unequally can be pursued. Muriella’s healing will in turn become a gift to many as she invests her life in helping Madagascar’s poor by becoming a voice for the voiceless.