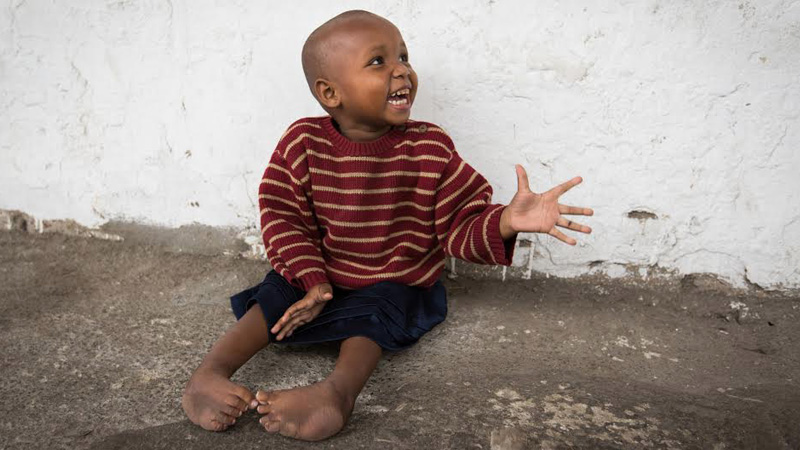 Cyriane often watches as her older sister puts on her shoes. Cyrianeâ€™s reaction is always the same â€“ she wants to wear shoes just like her big sister! Sadly, born with severe clubbed feet that are bent inwards at 90 degree angles, itâ€™s impossible for Cyriane to wear shoes â€“ except on her hands!

â€œShe likes to put shoes on her hands to be like her older sister,â€ shares Cyrianeâ€™s mother Emiliana with amusement on her face. â€œSheâ€™ll say, â€˜Look, Iâ€™m wearing shoes too!â€™â€

Four-year-old Cyriane is, according to the World Health Organization, among the 80 percent of children born with orthopedic deformities in developing countries each year. In her island home of Madagascar, the 34th poorest nation in the world, doctors are a luxury, specialized surgeons are a rarity, and a surgery to correct Cyrianeâ€™s feet costs far more than her family of farmers can afford.

â€œI was sad because all children [in our village] have normal feet but not my daughter,â€ recalls Emiliana. â€œI still had hope that her feet would be fixed.â€

Despite her physical deformity, Cyrianeâ€™s joy would not be stolen. Spirited and eager to show that she can do anything the other kids can do, Cyriane runs, hops and even plays football with the other children. The childrenâ€™s insults donâ€™t slow her down or dampen her spirits. However, Cyriane does have her limitations. Walking long distances is difficult and painful because she walks on the side of her feet.

Emiliana found Cyrianeâ€™s one hope … a hospital ship full of foreigners. They were offering free surgeries, including orthopedic surgeries like the one Cyriane needed. Emiliana saw pictures and children on the news who had bent feet just like Cyriane, and now they could walk on straight feet. She embraced the possibility that Cyrianeâ€™s result could be the same.

Together, mother and daughter traveled to the port city of Toamasina where the Africa Mercy and its volunteer crew were docked. At her first orthopedic evaluation, Cyriane demonstrated considerable functionality, considering her clubbed feet â€“ although, when she tried to keep her balance, it proved impossible. Cyriane would wobble on her feet before someone lent her an arm to steady her balance. Cyriane and the individual attached to that arm, Mercy Ships Physical Therapist Michelle Pullen (a volunteer from South Africa), formed a friendship over the next three months. Michelle witnessed Cyrianeâ€™s strong mind and spirited will, as Michelle casted, stretched and encouraged the four-year-old prior to surgery.

For eight weeks, Cyriane was treated on the Mercy Ship with the Ponseti casting method where feet are stretched closer to a corrected position each week and kept in place throughout the week with casts. Unhappy about being casted each week, Cyriane showed Michelle her feisty nature. But each week Michelle won Cyriane over with her patience, her smiles and her willingness to
paint Cyrianeâ€™s fingernails and toenails at the end of every appointment. After two months of casting, Cyriane had a small surgery to release the tendon that pulled her feet into an incorrect position. This was followed by more casting and a month of rehab after her surgery. Finally Cyrianeâ€™s joyous moment came. It was her turn to wear shoes! And the first person she wanted to see her new shoes was the caring volunteer physical therapist that had become her friend.

â€œCyriane has taught me a lot,â€ says Michelle. â€œHer whole world has gotten so much bigger because of her momâ€™s bravery.â€

Emiliana is filled with hope for Cyrianeâ€™s future â€“ a future that now includes shoes on her daughterâ€™s feet instead of her hands and the realization that Cyriane is finally able to walk on straight feet just like her big sister and all the other children in their village.