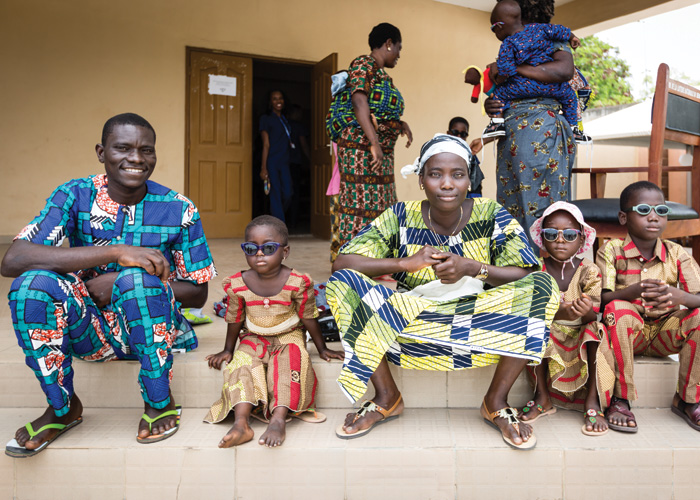 In 2001, the crew of our first hospital ship operated the young Amina of cataract, giving her back her sight and at the same time a whole new perspective on the future. But who would have thought that in 2017 our paths would cross again and we would transform his life a second time?

When Amina was a little girl, she started losing her sight. “At that time, my mother couldn’t afford eye surgery for me,” says Amina. But in 2001, they heard Mercy Ships was coming, and things took a turn for the better. A simple cataract surgery on our first hospital ship, the Anastasis, gave Amina her sight back. Without the surgical intervention, Amina doesn’t know how her life would have turned out. “Maybe I would be a beggar on the streets,” she says. But that’s not the case.

Sixteen years later, a grown-up Amina had her own family – a husband and four beautiful children. But the memories of her childhood began to resurface years ago when her son, Jacques, was two. “We noticed that he had vision problems,” says Amina. The neighborhood eye doctors said Jacques needed cataract surgery but would need to wait until he was 12 years old. Jacques made it through kindergarten pretty well. But, as time passed, reading and writing became very difficult.

“Jacques didn’t do well in first grade. He failed and repeated the class.” When his sight continued to decline, the worried parents took Jacques out of school. When daughter Elodie started learning to walk and talk, they noticed something was wrong with her eyes as well.Trying to figure out what to do, Amina’s husband heard about Mercy Ships on the radio at work. At once, they hurried to the eye center.

“I have four children, so I decided to bring all of them for screening,” she says, believing that only her Jacques and Elodie would need treatment.It was during the examinations that the parents were informed that six-year-old Marie would need surgery as well. Fortunately, baby Bernard’s eyes were given a clean bill of health.After the surgery of Jacques, Marie and Elodie, the family returned home. The kids’ sight continued to improve each day. Amina and her husband were so happy to watch them experience things for the first time. “When a bird is flying in the air, Elodie says, ‘Mom, look at the bird, look at the bird!’ And then all of them start shouting, ‘Look at the bird!’ They all clearly see and even point their fingers at the bird”, Amina reports with joy.Jacques will be heading to school for the next semester, and the others will follow. Amina knows from her own experience how important this is. “A child must go to school to learn things, to learn to write and read and later decide if he/she wants to learn a trade. This is why what Mercy Ships has done in my family is so great.”

Surgical Need
Back to blog