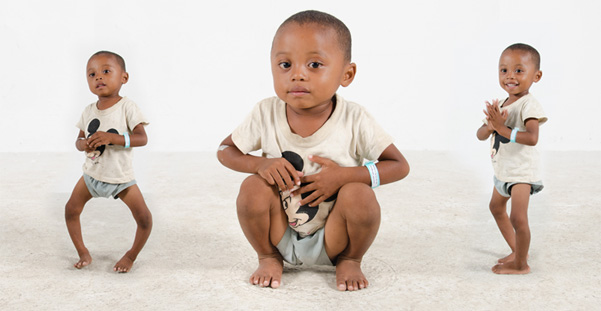 Jean was born with badly bowed legs, which caused many physical and emotional complications during his early childhood.

His O-shaped legs made it nearly impossible for him to walk normally let alone run, jump, kick or play. Instead, Jeanâs earliest memories are of isolation, ridicule and despair. While other children in his village were kicking soccer balls and jumping rope, Jean watched sadly from afar. He was never asked to play.

Jeanâs father, Theodore, is a rice farmer and the cost of surgery to heal his son was more than he made in an entire year. He worried about Jeans isolation and eventually saved up just enough to buy Jean a small keyboard piano in a local market.

The instrument became Jeanâs only solace and he would spend hours making the best music he could. To his parents, Jeanâs music was the most beautiful music in the world but they still had little hope that he would be healed.

When the village heard that Mercy Ships was coming, many doubted that such a miracle could be true. But Theodore embraced hope. if its on the national radio, it must be true, he said.

Theodore made sure Jean was among the first to line up for screening. There, Jean was given a yellow patient card and was approved for surgery. When a team of highly trained orthopedic surgeons arrived on the Africa Mercy, Jean underwent a five-hour procedure to straighten his O-shaped legs.

Six weeks later, his casts were removed and he walked normally for the first time. For three months, he received extensive physical therapy and rehab at the Mercy Ships HOPE Center. The compassion and kindness of the Mercy Ships crew gave Jean a new future. It has not been easy up until now, says Theodore, but we have been shown a lot of kindness here.

Surgical Need
Back to blog