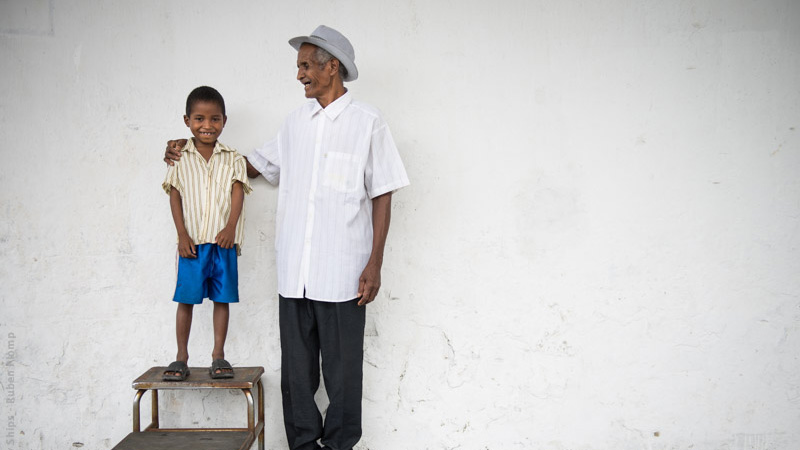 Although Fenosoaâ€™s family live in the same Madagascan village, he shares a hut with his grandfather. Why? â€œBecause he loves me,â€ explains his grandfather, Papa Denis.

Fenosoa was born with a cyst on his side. For five years it grew along with the little boy, sometimes making him lose his balance.

Papa Denis heard a radio broadcast about Mercy Ships providing specific free surgeries in Madagascar. The family was elated. So the tenacious 86-year-old and his pint-sized grandson walked for five days to reach the nearest public transport. Over three more days, mini-buses brought them progressively closer to the Mercy Ship … and the surgery Fenosoa desperately needed.

The screening team said Mercy Ships could help Fenosoa â€“ but the 2014-15 field service surgery schedule was full. The boy and his grandfather made the huge journey home with his precious appointment card and confidently returned in September for surgery during the 2015-16 Mercy Ships Madagascar field service. They had now walked for 15 days to get the help Fenosoa needed.

Grandfather and grandson chattered endlessly, and their deep love for each other was
evident. The boyâ€™s 750-gram thin-walled cyst (called a lymphangioma) was removed by Mercy Ships volunteer surgeons. Fenosoa was mystified. â€œI donâ€™t know what happened. I was sleeping, and when I woke up, it was gone!â€

Fenosoa is the youngest person from his isolated village to journey to the coast. It was going to be tough to explain a hospital ship to his playmates. He thought hard as he sat on his bed in the ward. â€œThe ship is so big, it looks like a village!â€ he said.

With a two-tooth grin, Papa Denis said they would take it easy after the young boyâ€™s recovery from surgery â€“ they would take six days instead of five to walk home … and set a slower pace!

Relieved of his life-long burden, Fenosoa could not wait to get back to his village friends. Back to endless soccer matches and marbles â€“ all of the rowdy games played by little boys around the world, regardless of the language they speak.