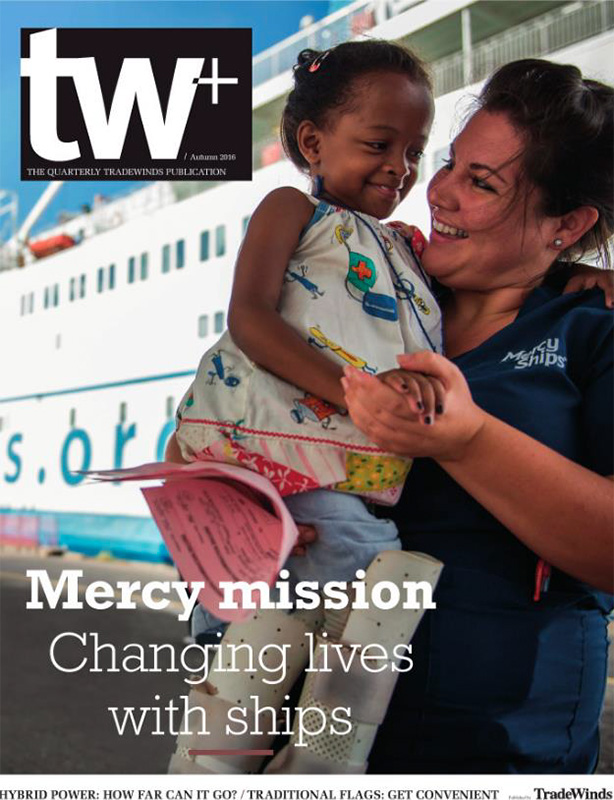 Jan Tuinier, master of the Africa Mercy, has a vision of making money from recycling garbage in the Dominican Republic. He relinquished his position as captain this summer to help 150 people who live in extreme poverty on a rubbish dump in the Caribbean country.

The project sums up Tuinierâ€™s decision to forfeit a regular salary. He spent about 10 years in European inland shipping and later at sea, working his way up from deck hand, before he came to Mercy Ships in 2001 for â€œadventureâ€ but saw â€œa way of practical Christianity I had not experienced back homeâ€ in the Netherlands.

Mercy Shipsâ€™ maritime training fund helped him acquire his deepsea qualifications and he returned as a long-term volunteer.

There he met his wife, Elizabeth, who has been with the organisation for 20 years and comes from the Dominican Republic. They married in 2004 and have been with Mercy Ships ever since, except for three yearsâ€™ commercial sailing from 2008.

Elizabeth is a nursery teacher in the onboard academy that caters for volunteersâ€™ children up to graduation. Their daughter Isabella is a pupil.
Being master still carries plenty of responsibilities when the vessel is in port for months, not least ensuring that power is supplied to the hospital and its operating theatres.

The Africa Mercy has a complex maintenance programme. Tuinier describes it as â€œuniqueâ€ because it has â€œso many overlapping departmentsâ€. Evacuation plans are very detailed and drills mandatory. â€œBetween three and five people can be in surgery any minute of the day. If there is an alarm, what do you do? They are still cutting into people,â€ he says.

The risks became apparent when the ship was put on orange alert for a cyclone near Madagascar. â€œWe had 12 hours in reserve to stop surgeries, stabilise patients, get them and 150 of the crew members off the ship and do final preparations to get out [of port] before the high winds arrived,â€ says Tuinier.

Fortunately, the cyclone veered away, but he became acutely aware of how people on the ship depended on him for their safety.

Finding qualified seafarers is not easy, partly because of a lack of navigation time, but Africa Mercy has around 15 local day crew working on deck, some of whom stay for years. They also benefit from training, some leaving with their AB (Able Bodied Seamen) tickets to get good jobs elsewhere. One is now working on a drillship and supporting many of his family back in Liberia.

When TW+ visited the engine room, Sarah Wegener, a 27-year-old fourth engineer from Canada, was taking apart a generator. She arrived last October and stays to the end of this year before doing her third engineerâ€™s ticket. â€œI have never had so much responsibility and training in my life,â€ she said. â€œI have a background in biological physics and wanted a practical application. This is my dream job: Itâ€™s crazy.â€