A pair of ski boot bags, four seafarers serving on the same ship and plenty of ambition marked the early days of Sweden’s Wisby Tankers.

The bags served as the company’s mobile office, a convenient way of transferring files between the four founders who lived in different areas of Sweden. There was no permanent office back in 2000 but the start of a company that would grow to 21 ships.

Today, it comprises 12 bitumen carriers and nine product and chemical tankers — a total that includes seven owned or partly owned vessels. During its 18 years, Wisby has maintained a relatively low profile but, in an interview with TradeWinds, it became clear how the Lidkoping-based owner and technical manager has grown through tie-ups with higher-pro-file players such as Trafigura and Stena.

One of the original founders, technical director and fleet manager Peter Rubinstein, met recently with TradeWinds onboard the hospital ship Africa Mercy in Cameroon during a visit of owners and brokers to see the work of medical charity Mercy Ships.

Africa played a role in the early growth of Wisby but the story starts with those ski boot bags. The founders were all employees of Sweden’s Laurin Maritime and serving together onboard the same vessel in various roles when the idea was hatched to design and build their own ship.

Rubinstein, a chief engineer with Laurin and previously an Erik Thun superintendent, says it soon became apparent that four seafarers without shipowning experience, employment for a vessel and limited equity were not going to persuade a shipyard to risk an order.

The other three founders were Jonas Engstrom, Johan Markstrom and Stefan Dombrowsky. But luck was on their side as the Stena group had ordered a pair of new tankers and was prepared to sell prior to their delivery its 6,300-dwt Stena Barbados (built 1991).

The ship was acquired in 2000, with a two-year charter back to Stena to fulfil its contract, with Texaco delivering fuels in the Caribbean and Nordea providing the financing. With no shoreside employees or office, the four founders fulfilled the roles of captain and chief engineers onboard, and took turns when ashore to handle administrative matters.

“We handed the office over in ski boot bags,” Rubinstein says. In those early days, the managing director title was rotated — a responsibility now handled by Engstrom. For 10 years, the founders kept the business running while still individually living in different parts of Sweden, including Stockholm and the island of Gotland. 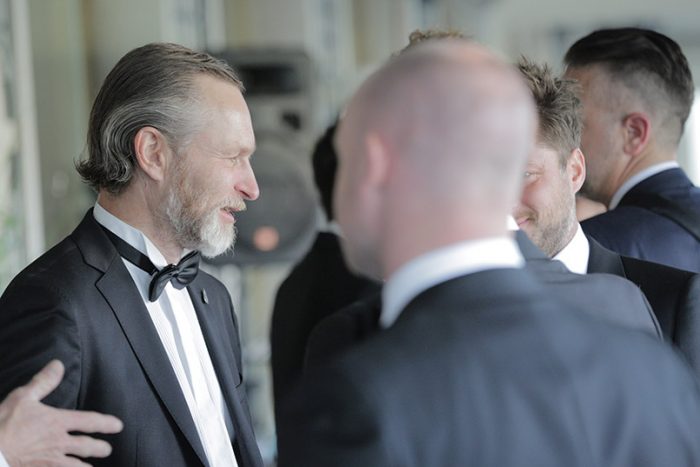 NEWBUILD AMBITIONS MET
Eventually, their newbuilding ambitions began to materialise after Engstrom called Stockholm-based Preem Petroleum, requested a meeting and secured employment to support a contract with ship-yard Ferus Smit in the Netherlands for a 7,500-dwt product tanker. “All the pieces fell together,” Rubinstein says. “We had the ship-building contract, the financing and five-year employment.”

Building at Ferus Smit meant Wisby suddenly had a “fixed position for our ski boot bags”. The yard agreed to construct a single ship — the 7,479-dwt Wisby Verity (built 2004) — as it was a re-peat of a Thun series with modifications. Preem was in the process of renewing its time-charter agreements. When the two-year Stena Barbados charter ended, that ship traded for a period in West Africa.

A six-month charter was then concluded with La Marocaine de Cabotage (Marcab), a cooperation with the Moroccan company that resulted in Marcab purchasing the Stena Barbados and the establishment of a new 50:50 joint-venture outfit with Wisby based in Lidkoping called Casablanca Tankers.

That joint venture is still operating 16 years later, with Wisby responsible for vessel management — both technical and crewing. Marcab, a distributor of consumer fuels in Western Sahara, is in charge of the cargoes. But the Stena Barbados was single hulled, needed replacing, and Marcab had employment for two vessels. So, in 2006, Wisby went to China, where it struggled to find a yard interested in building smaller, complicated vessels.

Eventually, it turned to a former chief engineer who had built up a huge fishing vessel fleet, sold it and instead started a fish factory — Penglai Jinglu Fishery — in Shandong that employed around 2,000 women. Rubinstein says the owner’s aim was to create an industry — also in the area — employing men. With only an artist’s impression of the planned shipyard, Wisby signed up at the fish factory for two tankers of 5,850 dwt, plus two optional vessels. It provided detailed design, as well as electrical supply and installation contractors from Sweden.

The ships were built using two slipways, while the yard owner started construction of the first of two dry docks large enough to build simultaneously four full-size panamax bulkers and two half sections, for other owners. After digging the massive hole, lining it and installing the gates, work began on constructing a canal to connect the 369-metre by 102-metre dry dock to the open sea. When the first Wisby tanker was launched and moored at the outfitting jetty, up to 800 people arrived to see the yard’s inaugural ship afloat.

But the occasion was marked by the yard’s huge 800-ton lift-capacity crane collapsing. There were few casualties, says Rubinstein, who thought the yard — Penglai Zhongbai Jinglu — might go bank-rupt because of the accident. But 10 months later, an even larger gantry crane of 1,000-ton capacity had been installed. Since 2012, Greek owner Laskaridis has built around 25 bulkers of 63,000 dwt and 81,000 dwt at the yard, and returned with an order for more kamsarmaxes earlier this year.

Wisby’s first Chinese-built tanker — the 7,348-dwt Wisby Argan — was delivered around 12 months late in 2009. Its sistership — the Wisby Cedar — was handed over six months later.

CASH CLAWED BACK
The two options were exercised in the summer of 2008, prior to the market plunging and when new-buildings were expensive. Fortunately for Wisby, they were badly delayed and enabled the owner to claw back some money. One of the optional ships was converted to dynamic positioning and sold to Trafigura for deployment in Angola. Ferus Smit was also awarded a contract for a second vessel of 7,500 dwt. The Wisby Wave was completed in 2009 for another time charter to Preem. Wisby also started to take ships for technical management from Rederi AB Gotland — the first being the MR tanker Gotland Marieann (built 2008) in 2008 — followed by three more MRs on a similar basis, as well as an LR Gotland tanker.

“Suddenly we were increasing in size as a management company,” Rubinstein says.