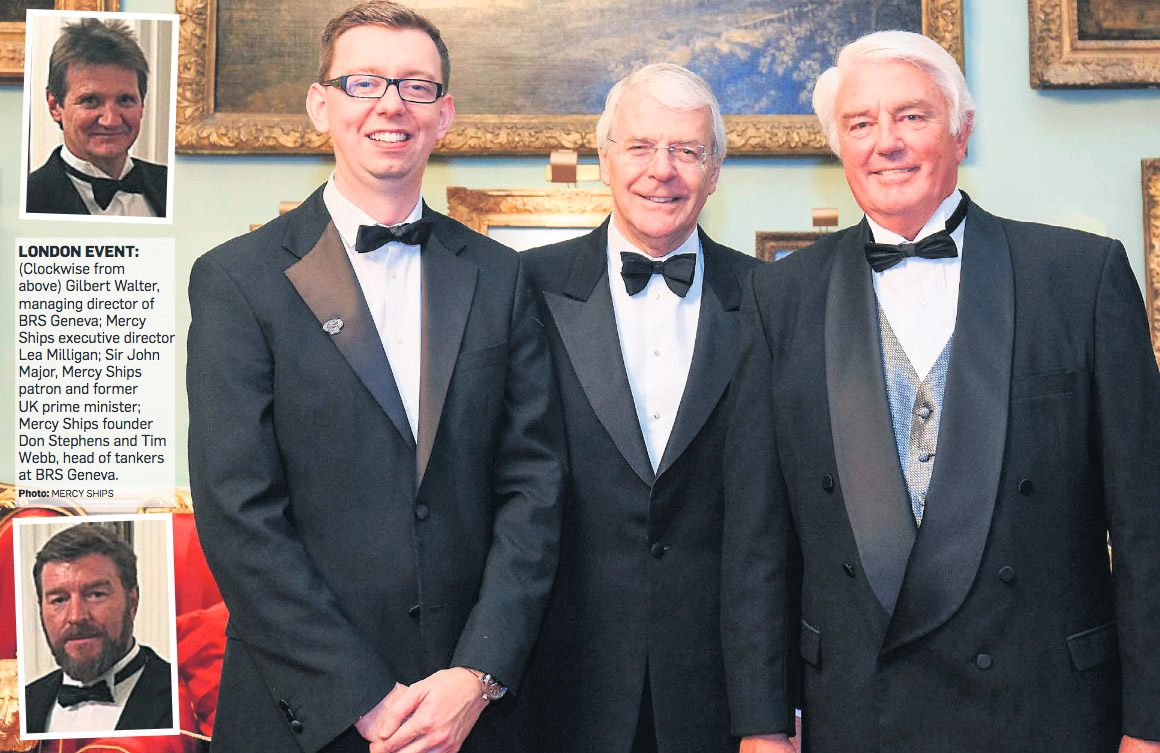 Around $400,000 and possibly much more may flow from Mercy Ships’ Cargo Day fund-raising event on 19 October in a week that also saw the hospital ship charity’s UK arm celebrate its 20th anniversary.

Said broker Tim Webb, who along with colleague Gilbert Walter was behind the launch of Cargo Day: “The heartbeat is there and it won’t stop. It can only increase.

I am very happy with what we have been able to achieve and Mercy Ships is pretty knocked out by the support.”

Webb, Barry Rogliano Salles’ (BRS) head of tankers in Geneva, says the money raised may only be a small part of Mercy Ships’ annual budget operating the world’s largest private hospital ship, the Africa Mercy, but it has drawn in a new group of backers by embracing the shipping community.

By the start of this week, almost 50 cargoes had been committed to brokers, port agents and inspection companies and nine address commissions, as well as 32 pledges of money, including individual pledges of at least $25,000 each by Oldendorff Carriers and Stena Bulk.

Donations of money that can still be pledged on the website until the end of the year are tiered Shipping rallies behind Mercy Ships Geoff Garfield London ANNIVERSARY CELEBRATIONS: Guests in the lavish surroundings of London’s Mansion House. $0-10,000, $10,000-$25,000 and $25,000 plus.

One owner and five charterers are giving their full address commissions and Webb says there is time to get especially more owners on board. Six or seven brokers have participated, which Webb describes as “phenomenal”. The tanker man said: “There is a lot of generosity out there.”

He says “excellent” support has come from traders, particularly in Geneva where both he and Walter are based with BRS. Commissions on cargoes, where brokers
donate 50%, are expected to reach at least $200,000, plus upwards of $100,000 from address commissions.

Total broker contributions will not be known for some time because commissions will not be determined until vessels have been fixed and freight is paid.
TradeWinds has partnered Mercy Ships Cargo Day and Webb said: “Without your help we would not have got this off the ground the way we have. I and Mercy Ships
want to thank TradeWinds for its invaluable help.”

A fund-raising gala ball is also planned for next year. Meanwhile, Mercy Ships UK also celebrated last week at London’s Mansion House its 20th anniversary at which patron and former UK prime minister Sir John Major said: “For the past 20 years, Mercy Ships has helped to bring care and comfort to those who are in need of medical treatment.

The extraordinarily and selfless endeavour of all of those concerned is a real and tangible example of man’s humanity to man.”

Mercy Ships UK executive director Lea Milligan said that from modest beginnings from its headquarters in Stevenage it had become the largest Mercy Ships’ contributor of funds and volunteers outside of the US.

“Over the next 20 years, we envisage that the charity will deliver a further 48,000 volunteers from around the world to serve on board the ship and help continu Mercy Ships life changing work.”

Don Stephens, Mercy Ships founder, said the organisation, whose Africa Mercy recently arrived in Benin, West Africa for a 10-month field service, was leaving a legacy of “hope and healing in every country we visit”.

He added: “The radical compassion upon which the charity was founded in 1978, and 20 years ago when we extended our efforts into the UK, is still the driving force of Mercy Ships today.”

A newbuilding for Mercy Ships is under construction in China.