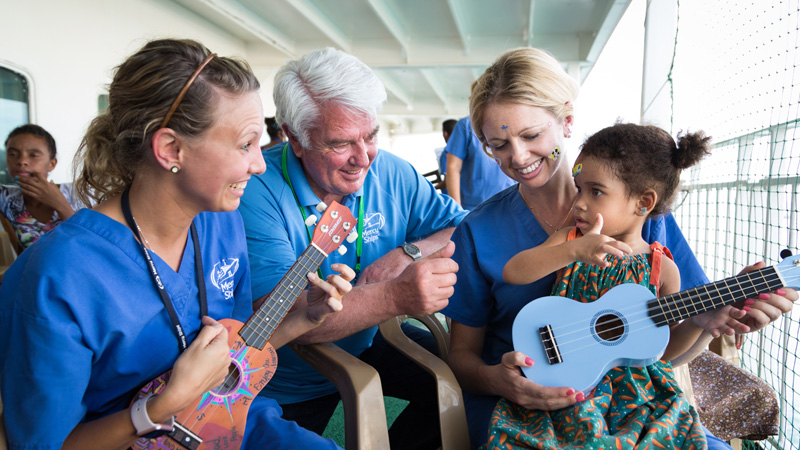 Shipbrokers, charterers and owners have the opportunity to participate in a â€œCargo Dayâ€ fund-raising project for Mercy Ships, which operates the worldâ€™s largest civil hospital vessel.

The organisation has launched a website (cargo.darwinstaging.com), where participants can pledge an amount of money that will be donated to the charity.

Mercy Ships has worked in more than 70 countries, where over 2.5 million people are said to have benefitted.

Professional surgeons, dentists, nurses, healthcare trainers, catering staff, seamen, engineers and others donate their skills and time so that thousands of patients each year receive free operations and other healthcare.

The focus is Africa, where a second purpose-built ship â€” ordered with the help of broker Barry Rogliano Salles (BRS) â€” is expected to be deployed in 2018.

The website for Mercy Shipsâ€™ Cargo Day on 19 October enables the shipping and trading community to start making pledges. The idea is that participants receive cargoes or nominations from charterers and use the commissions for the sums they pledge.

Those pledges are tiered so participants are aware of the range of contribution they are making.

Especially instrumental in launching the Cargo Day has been BRSâ€™s head of tankers in Geneva, Tim Webb, who has visited the hospital ship twice this year during its stay in Madagascar.

Timâ€™s son, Oscar, who has recently completed his training as a seafarer at State University of New York (SUNY), has been serving as a crew volunteer on the Africa Mercy.

The brokerageâ€™s involvement with Mercy Ships is down to BRS Genevaâ€™s managing director, Gilbert Walter, a newbuilding broker, who read about the organisationâ€™s acquisition of the former Danish ferry Dronning Ingrid (built 1980), which was converted into its current vessel, the Africa Mercy.

Several years later, he discussed with Mercy Ships the need for a new ship built in China, with BRS assisting free of charge in finding a yard technically capable of building a tailor-made vessel and at a price the charity could afford.

Walterâ€™s motto is: â€œIf everyone does something to improve this world full of misery, then it has a chance to improve.â€

Webb says he is convinced people in the shipping industry will support a â€œmaritime solution such as a hospital ship that sails the oceans manned with volunteer crew and doctors who pay for their own flights and onboard costs.â€

He says he was left â€œspeechlessâ€ by what he saw when visiting the Africa Mercy.

â€œThis is why we decided to set up Mercy Ships Cargo Day as it will give oil companies, commodity traders, brokers, agents, shipowners and all other shipping related companies the possibility to assist people in need,â€ said Webb.