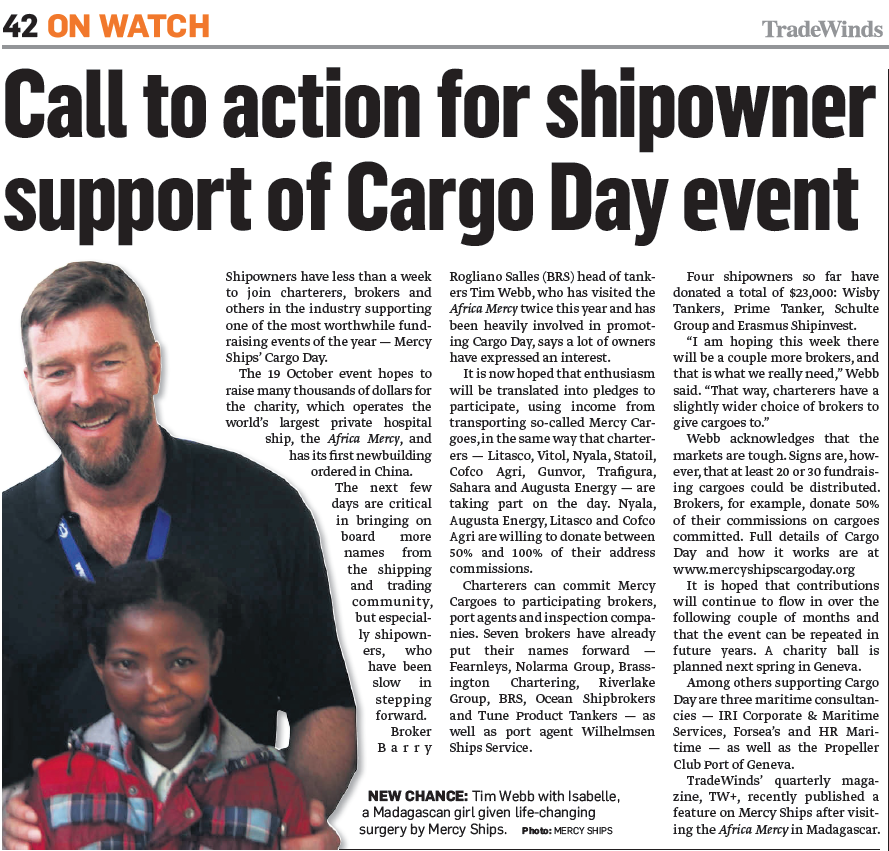 Shipowners have less than a week to join charterers, brokers and others in the industry supporting one of the most worthwhile fundraising events of the year â€” Mercy Shipsâ€™ Cargo Day.

The 19 October event hopes to raise many thousands of dollars for the charity, which operates the worldâ€™s largest private hospital ship, the Africa Mercy, and has its first newbuilding ordered in China.

The next few days are critical in bringing on board more names from the shipping and trading community, but especially shipowners, who have been slow in stepping forward.

Broker Barry Rogliano Salles (BRS) head of tankers Tim Webb, who has visited the Africa Mercy twice this year and has been heavily involved in promoting Cargo Day, says a lot of owners have expressed an interest.

It is now hoped that enthusiasm will be translated into pledges toÂ participate, using income from transporting so-called Mercy Cargoes, in the same way that charterers â€” Litasco, Vitol, Nyala, Statoil, Cofco Agri, Gunvor, Trafigura, Sahara and Augusta Energy â€” are taking part on the day. Nyala, Augusta Energy, Litasco and Cofco Agri are willing to donate between 50% and 100% of their address commissions.

â€œI am hoping this week there will be a couple more brokers, and that is what we really need,â€ Webb said. â€œThat way, charterers have a slightly wider choice of brokers to give cargoes to.â€

Webb acknowledges that the markets are tough. Signs are, however, that at least 20 or 30 fundraising cargoes could be distributed. Brokers, for example, donate 50% of their commissions on cargoes committed. Full details of Cargo Day and how it works are at cargo.darwinstaging.com.
It is hoped that contributions will continue to flow in over the following couple of months and that the event can be repeated in future years. A charity ball is planned next spring in Geneva.

Uncategorised
Back to blog