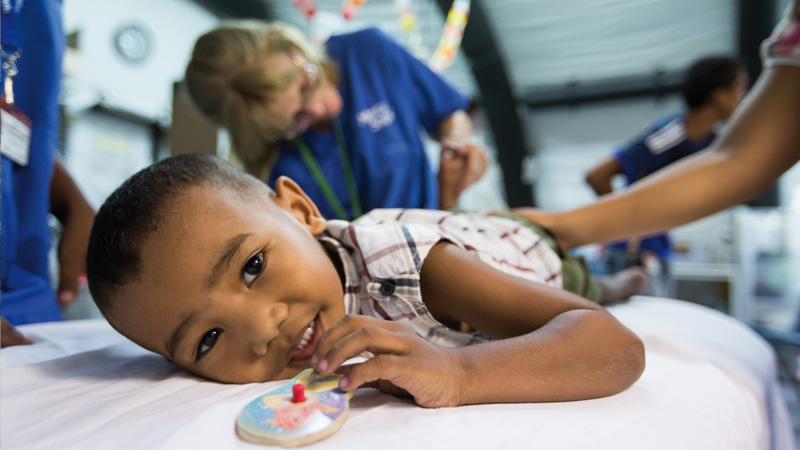 Prinscio was two when he took his first steps, walking on the tops of his twisted feet. Born with bilateral club feet, he developed this curious gait to get around. He was ashamed of the way he moved, and he would declare, â€œDonâ€™t talk about my feet!â€ to anyone who stared.
In every other way, Prinscio simply delighted in life. â€œHe does everything with happiness. He smiles with his whole body,â€ his mother Joceline says.
Within weeks of his birth, Prinscioâ€™s parents tried correcting his condition with Malagasy massage. A dozen â€œhealersâ€ gave them conflicting advice. His parents became deeply discouraged because they had spent so much money and nothing helped.
Three years later, a medical specialist told them Mercy Ships was in Madagascar providing the exact treatment Prinscio needed â€“ free of charge.
At his first appointment, volunteer physiotherapists explained Prinscioâ€™s club feet could be corrected by plaster casts, minor surgery, exercises and the use of night-time braces.
The bright little three-year-old enthusiastically helped at his therapy visits saying, â€œIâ€™ve got to do it!â€ He also chatted about his dreams, â€œMamma, when my feet are fixed, I will ride a bike and play football. I will be like other kids!â€
After eight sessions and a series of eight double leg casts, Prinscio underwent a minor surgery called a tenotomy (tendon release) to attain the last degrees of correction in his feet.
As the day approached to finally remove his casts, Prinscio was beyond excited. His mother overheard him talking to one of his friends, â€œTomorrow when I come home, my feet will be just like yours!”
On December 22nd the casts were removed, revealing beautiful straight feet. Joceline exclaimed, â€œThis is the best Christmas gift ever!â€
Large, heavy callouses remain on the upper side of Prinscioâ€™s small feet. It takes a moment to realize these are the â€œheelsâ€ he previously walked on.
Prinscio now stands confidently, flat on the soles of his beautifully restored feet.