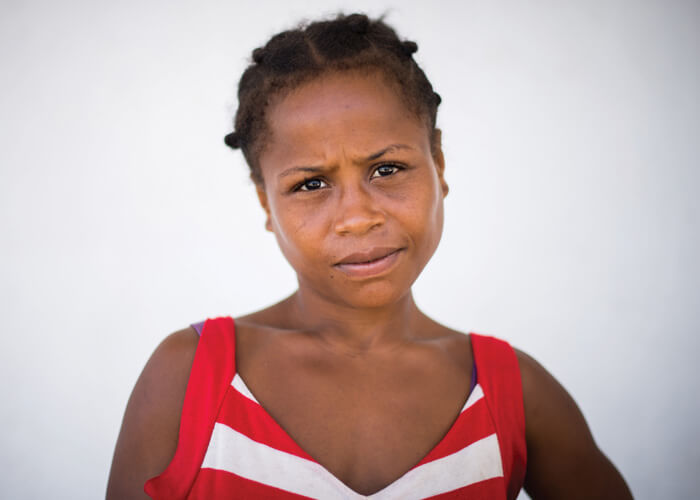 Eighteen-year-old Fanjakely arrived at the Mercy Ships patient screening with a look of total despair in her eyes and unsmiling hopelessness on her face.

It had always been her dream to be a mother. When she was fifteen, her captivating features and grace caught the eye of a handsome farmer, and they were wed. Not a day went by without him telling her that she was beautiful. He was her first love.

Her life became even more like a fairytale when she discovered that she was going to have a child. As the miracle inside her grew, she would smile to herself that secret smile that all mothers share. She had no idea that her months of excitement were, in fact, a prelude to sorrow and suffering.

The fairytale ended when her labor became four days of excruciating, whole-body pain. On the third day, the midwife tried to help, but all her knowledge and experience brought no relief. To find help, they would have to leave the village. At 7 a.m. on the fourth morning, Fanjakely, her husband, brother and mother-in-law set out in a pirogue (a small boat much like a canoe) for a four-hour ride on the river to another village. Then they crammed into a packed taxi-brousse (Malagasy bus). Fanjakely passed out two hours before they finally reached the hospital at 7 p.m. There she finally delivered a baby boy named Antonio.

But she quickly discovered that her heartache was just beginning. She described what happened the next day:  “After I stood up to go to the toilet, the urine flowed out. It was flowing plenty … and it would not stop.” With absolutely no idea of what was happening, or why, she was terrified, confused, unhappy, and angry, “But I didn’t know who to be angry with,” she said.

Sadly, Fanjakely had just become another victim of inadequate healthcare systems in developing countries. Her problems could have been easily prevented by having a caesarean section. Every day, 10 women in Madagascar die from complications related to pregnancy and childbirth. Many more survive but, like Fanjakely, suffer from a debilitating injury called obstetric fistula. It is a condition caused by obstructed labor that creates an opening between the bladder and the birth canal, resulting in uncontrollable, continuous leakage of urine. It’s estimated that 2000 Malagasy women develop fistula each year.

The doctor explained that the fistula could be surgically repaired, but Fanjakely knew that she would never be able to afford it.  She said, “I was so sad, because I thought I would never get health, because I have no money for surgery.”

Life became very difficult. In spite of her efforts to stay dry, the smell of the constant flow of urine caused people to reject her. Her young heart was broken.

In the midst of all the horror, Fanjakely was grateful for two miracles. Often women who suffer an obstetric fistula give birth to a stillborn child, and their husbands abandon them. But Fanjakely was blessed with her beautiful, healthy baby boy. And her husband never stopped loving her. He was the epitome of unconditional love. He never stopped telling her that she was beautiful. He would encourage her by saying, “Maybe one day you will get surgery.”

Little did they know how prophetic his words were. A radio announced Fanjakely’s third miracle: a hospital ship that treated obstetric fistula for free was coming to Madagascar! With what little money they had, Fanjakely bought adult diapers and made the four-hour journey to Toamasina.

After one and a half years of suffering, a free surgery gave Fanjakely healing and joy.

Stephanie Fiduk (USA), the Women’s Health team leader, said, “There is a BIG transformation in Fanjakely’s personality. At screening, she was quiet and scared to be on the ward. Now, she’s making friends.”

The girl who never smiled became known as “The Smiley Girl.”

Now, Fanjakely can continue her fairytale life. She said, “I want to build a home … and to be happy with my husband and son.” She’s looking forward to swimming in the beautiful Madagascar waters again and going back to one of her favorite places – church. With a sweet smile, she added, “I am really grateful. I am fortunate.”