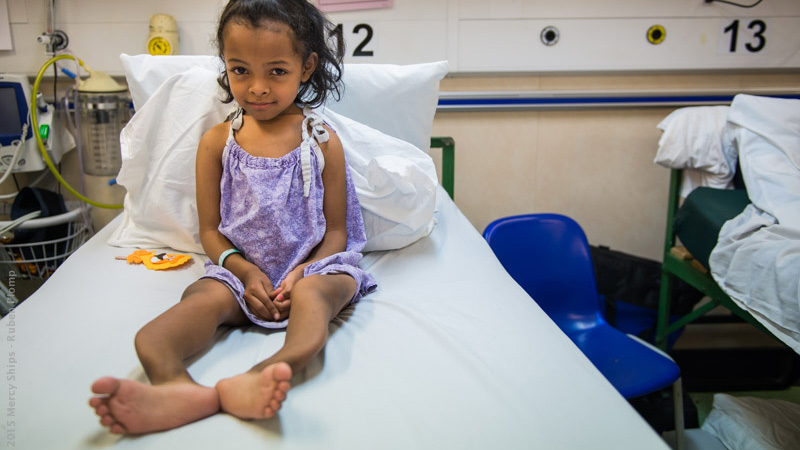 The tiny nine-year-old struggled into the Mercy Ships admissions tent. Fifalinaâ€™s legs seemed to be slowly folding beneath her. They could no longer hold her erect.

Her mother, Ludvine, says Fifalinaâ€™s legs were normal at birth. However, when Fifalina started to walk, she often fell, and Ludvine noticed that her legs began to curve.

Fifalinaâ€™s father had to find work each day to provide for his family, but they managed to scrape together enough money to visit a doctor. He told them the little girl needed calcium and said there was nothing more he could do. Then the desperate parents sought help from a traditional healer who massaged Fifalinaâ€™s legs. Nothing helped, and her legs continued to weaken.

This bright little girl was eager to attend school despite her physical challenges. Initially, Fifalina could walk the 30 minutes required. â€œHer curved legs were getting worse and worse,â€ Ludvine recalls. â€œOne time she fell down at school. After that, her legs were really curved, and her knees could not support her.â€ So Ludvine carried her daughter on her back to and from school every day.

Ludvine first heard about Mercy Ships on television. â€œThey said Mercy Ships is healing,â€ she explains. â€œAt the beginning we did not know that they are fixing legs. I just knew about them removing tumors. They published a video. When I saw Vanyaâ€™s story*, I wanted to see healing in my daughter.â€

They learned of a patient screening nearby. â€œI believed they could fix my legs!â€ exclaims Fifalina. â€œI said to myself, â€˜Let’s just go there, and we will see.â€™â€ She was examined and given an appointment.

Mercy Ships consultant Dr Frank Hayden (USA) performed complex orthopedic
surgeries, correcting Fifalinaâ€™s twisted upper and lower legs by rotating her bones through more than 200 degrees. A series of pins now holds her knees and hips in alignment. After surgery, Fifalina was enveloped in full-leg plaster casts that weighed almost as much as she did.

At nine, Fifalina is the average height (according to the World Health Organization) of a four- year-old. The utter cuteness of this child, displayed in her infectious giggle and broad grin, disguises the valiant heart of a tiny warrior. Time and time again during her procedures, Fifalina smiled, bit her lip, and pushed through a pain-barrier that would make a grown woman whimper.

When her leg casts were first removed, Fifalina declared, â€œIâ€™m going to learn to walk again!â€ Ludvine gasped and shed tears when she first saw her daughterâ€™s straight little legs.
Months of splints and physical therapy followed Fifalinaâ€™s surgery as she bravely relearned to walk. Her muscles, weak from years of disuse, were retrained by a team of volunteer physiotherapists. Daily routines were performed with peals of laughter and entertaining activities.

Ludvine had plenty of time to reflect as they journeyed through the six-month long process of surgery and rehabilitation. â€œIf they did not fix her legs, she would suffer a lot, and I would suffer too. If her legs were left like they were, I think she would end by walking on her knees. When I look at the photo before the surgery, I can see that her legs are so curved, like if her knees are going down. So if they did not fix them, forever it would be like it was. Our problem would get worse and worse. I would not be able to carry her on my back. Now she will be able to walk and just hold my hand!â€

Finally the day arrived when Fifalina could achieve her milestone tasks unaided â€“ balancing on one leg, walking with one foot in front of the other, and standing on tiptoes. These ordinary playtime activities were herculean and enchanting new experiences for this not-so-ordinary nine- year-old.

Ludvine thinks Fifalina would make a great teacher when she grows up, but the Mercy Ships crew members will tell you that Fifalina is already a pint-sized inspiration.