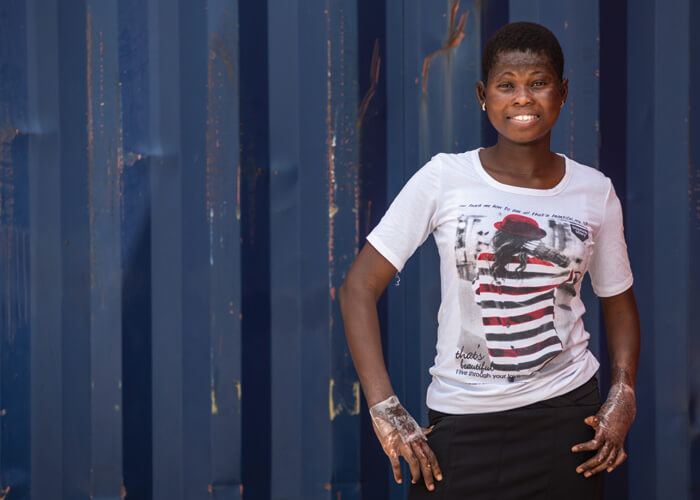 Blandine was alone when her candle slipped off the bedside table, fell on the surrounding mosquito net, and engulfed her room in flames.

The 22-year-old woman recalls that terrible night. “There was oil in an open bottle – a liter and a half of it – I didn’t know it was there.” Motioning upward with her arms, as if defending against a torrent of blows, she explains, “I used my hands to cover my face. I don’t know how I reached the door – the fire was all around…” She shakes her head. “I think it’s God who helped me get out.”

At the time of the accident, Blandine was apprenticed at a tailor shop, only eight months away from gaining her certificate and becoming a full-fledged seamstress. “But, since then, I have not been able to sew,” she says. The fire left her legs burned, her forehead crowned with a thick scar, and her fingers and hands practically useless.

She continued to work at the tailor shop, but even basic tasks became frustrating. She could still use scissors, but her palms would throb as she struggled to cut a straight line. Without the use of her hands, it was nearly impossible for her to finish her training and find future work as a seamstress. “It was getting very hard to sustain myself,” she confesses.

In times like these, family would usually step in, but her mother had left when Blandine was young, and her father had died six years previously. Although she lived with her older brother, he couldn’t help her much. “Even before the burn, somedays I would not eat till night,” she recalls. And although other relatives used to dote on her, their affection seemed to have burned up with the fire. “Before, I was the chère, the darling of the family,” she says. “But now…” she adds as she looks down at her hands, “nothing.”

Then Blandine looks up. “God answered my prayers,” she says. She is sitting outside the HOPE Center, the Mercy Ships outpatient guesthouse where she’s been recovering after surgery. She’s been returning to the ship nearly every day to work with volunteer Mercy Ships occupational therapist Desre Bates (ZAF). Slowly but surely, her hands have improved.

“It’s been a long road” says Desre, who’s formed a kinship with Blandine. “It was very hard to see her go after her last appointment.” The pair have worked together for nearly five months, sweating through dozens of hours of rehab to help Blandine regain movement and strength in her hands. “They are better,” says Desre, “but they’re not the same. Sewing won’t be easy, but I believe with work, she can do it.”

Perhaps, though, coming to the Africa Mercy was about more than healing Blandine’s scars, more than providing function in her hands, and more than being able to sew again. “She’s doing this alone,” said Desre. “No one from her family is helping her.”

But, as Blandine recovered on the Africa Mercy, a new family network began to form. “Georgette and Esperance took me as their own child,” she recounts. In the ward, Blandine happened to be in one bed, Georgette in the next, and Esperance in the one after. The three spent weeks onboard together – all had been burned severely, and all were separated from their families as they healed.

Even now, weeks later, Blandine rides across town on a motorcycle-taxi, spends the evening on Georgette’s patio, and leaves with a tin of butter and a few other necessities. “She does everything for me,” the 22-year-old recalls. “She doesn’t leave me on my own.”