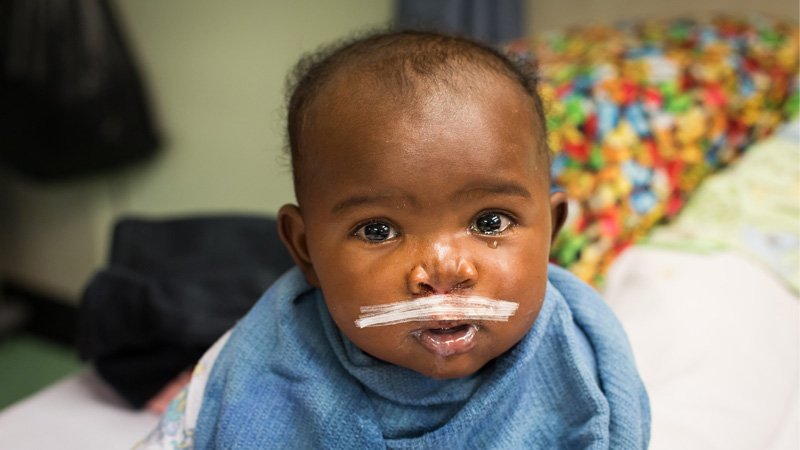 Preparing to land, the Mission Aviation Fellowship (MAF) plane dipped its wings over the Mercy Ship, but Viviaby was oblivious. She focused on comforting her tiny daughter. At almost seven months old, Haingo weighed only 2.2 kilograms (4.8 pounds). She was severely malnourished because of her cleft palate.

Crammed full of courageous love, Viviaby had walked for two days to get help. She took her first ride in a car and her first ride in a mini-bus to reach the screening team in her region, and now she was in her first airplane. The tiny woman hugged her daughter close as they flew.

Mother and daughter were rushed onboard the hospital ship, and pediatric nurses began a 24- hour program of emergency nutrition.

Shelby Olufson (USA) was charge nurse when Haingo was admitted. â€œI was heartbroken in a way Iâ€™d never been before. It was mind-blowing. She was so small! If you didnâ€™t know her age, you would think she was new-born. I didnâ€™t want to believe she was almost seven months old.â€

Dedicated nursing care enabled Viviaby to sleep well for the first time since Haingoâ€™s birth. â€œThey were feeding her with an oral feeding syringe because she couldnâ€™t suck a bottle,â€ she explains. â€œLater they used a nursing bottle; they used milk from my breast.â€

The medical team explained to Viviaby she had managed against all odds to save her daughterâ€™s life. Pneumonia as well as malnutrition had been a very real threat.

Haingo no longer cried between feeds. She began to gain weight and became more responsive. Viviaby talked with other mothers whose babies had the same condition. She watched the other cleft lip babies coming back restored from surgery, and she was comforted. Viviaby desperately needed to talk and share with others who knew just what she was going through. She was no longer alone.

In just 10 days Haingo was stable enough to be discharged to the Mercy Ships HOPE (Hospital Out Patient Extension) Centre.

Viviaby brought her daughter to the ship to be checked by Jillian Davis (USA), the Infant Feeding Program (IFP) dietitian, each week for four months. Haingoâ€™s weight was tracked, and they discussed her development and care. Viviaby learned about her babyâ€™s condition and how to prevent milk being lost through the hole in her palate as she fed.

“The most impacting aspect of IFP is the parentsâ€™ gaining hope,â€ shares Jillian. â€œThey learn to properly feed their baby and see their malnourished child start to thrive. I love building a relationship with the mothers and encouraging them through their journey from the time the baby
is started on IFP through to surgery. I love seeing the transformation as the infants gain weight, get stronger and reach developmental milestones.”

Jillian empowered Viviaby and helped nurture Haingo toward her growth goals. When the baby passed the 3.5 kilogram (7.7 pounds) mark, it would be safe to operate on her cleft lip. Haingo needed to be 10 months old before it would be possible to operate on her cleft palate. In consultation with her medical team, Vivaby decided to wait for the surgeries to be performed together.

â€œBefore, she was crying a lot because she did not eat enoughâ€ explains Vivaby. â€œBut now she is happy! She has enough food!â€

As Haingo finally grew, she began to do all the heartwarming things that babies her age are supposed to do. She tracked movement with eyes that were previously glazed, and she waved â€œvelomaâ€ (goodbye) with chubby arms that had been so frail. She began to suck her thumb. And she reached the vital â€œaverage weight for heightâ€ benchmark.

Five months after their arrival, Haingo was finally scheduled for surgery to repair her cleft lip and part of her palate.

Viviaby rushed to gather Haingo in her arms as the infant came out of recovery after her operations. â€œSheâ€™s beautiful!â€ was all the overwhelmed mother could manage to say.

Mother and daughter will return in a few monthsâ€™ time for Haingoâ€™s final palate surgery. Then we will hear about the villagersâ€™ responses to this baby they were sure would die â€“ the baby who was transformed by mercy.