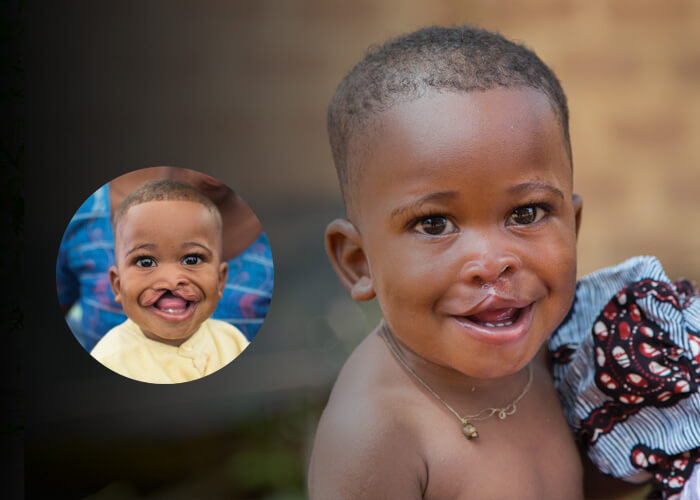 My name is Simone, and this is the story of my youngest child, Israel …

After thirty hours of labor and a last-minute C-section, my first son was abruptly brought into the world. But as quickly as he came in, he was taken away by the nurses because I was in such a bad condition. I continued to fight through the night. When I finally had the joy of laying eyes on my child the following day, I was shocked – I cannot tell you enough how shocked I was. My baby boy’s mouth was torn open at the top! Immediately, I fainted to the ground.

After the nurses helped me recover, I took my son in my arms, cooing to him, admiring his eyes, and finally giving him the name we had planned on: “Israel, the victorious one.”

My husband and I began to pray and search for a solution. But after months of carrying Israel to different hospitals, we came up empty and exhausted. I did not stop praying, though.

Then one day, out of the blue, my husband heard some good news – a hospital ship, the Africa Mercy, had arrived to serve our people. I turned to look at Israel and nodded as a spark of hope ignited in my chest … I was determined to try again.

When I found out that the ship had already begun to see patients, I wasted no time in going to the screening center. With my son on my back and some food in my bag, I set out, arriving toward sunset on a Wednesday afternoon. It was too late to get in that day, so we slept outside on the ground in order to keep our spot in line. After waiting through the long hot day on Thursday, we still remained far back in the crowd. Exhausted, I laid down the same piece of cloth from the night before. Friday morning came, and the line continued to inch forward. But, as the sun dipped closer to the horizon, the gatekeeper let in the last patient for the week. Closing the metal door with an apologetic smile, he informed us we should come back on Monday.

My husband, knowing how tired I was, sent his brother to keep our place in line that night. Israel and I went home and collapsed on our bed for a few brief hours of sleep before heading back the next morning.

That entire weekend, I again kept our place in line. The hours stretched out in front of us. But when I looked at my son, Israel, I took courage – we had named him “victory” for a reason, and I felt my faith being renewed.

Finally, Monday morning arrived. I awoke from my sleep before sunrise, stretching my weary limbs and giving Israel his bottle of baby formula. As I nibbled on a few crackers, I looked again toward the front of the line – the entrance was now only three meters away. My heart jumped a little, knowing we were bound to get in that day.

Before the sun got hot, the gatekeeper let in the last people in front of us and then turned toward me and smiled. As he ushered us inside the screening center, I breathed a sigh of relief. Even though the lines inside still stretched back and forth across the courtyard, I felt we were safe. I knew that a nurse would see Israel today and that he just might – just might – receive surgery onboard the Africa Mercy.

The line moved quickly, and, before long, we were beckoned inside. Israel was examined and weighed and admired. Even with a torn mouth, he was quite a stunning baby! Then a woman in blue motioned for me to come over.

I was in suspense.  Little electric twinges were coursing through my heart, and I prayed silently, “Oh, please, let this be a ‘yes.’” When I sat down in front of her, she smiled at me as if she had some secret to share. I knew then what she was about to tell me … Israel, my son, would indeed receive surgery onboard the Africa Mercy.

Onboard the hospital ship, we all prayed together before surgery. I did not stop my prayers the entire time Israel was being operated on. When he was returned safely back to my arms three hours later, I kept on staring at his mouth – no longer torn, but whole.

My son has found his first victory, and he is now a handsome boy!