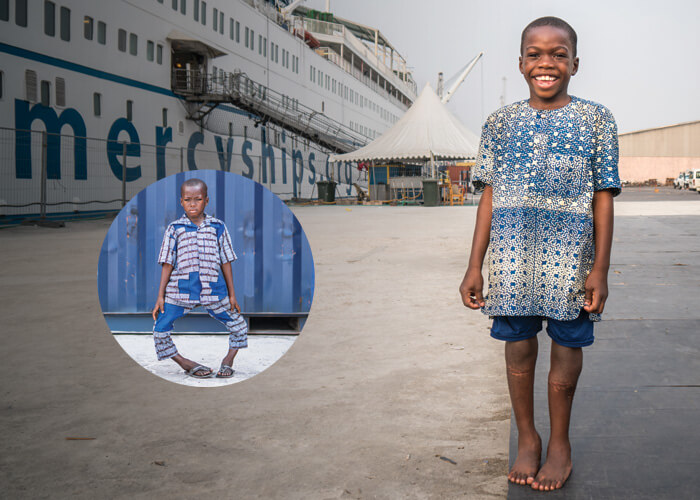 “It was the stunning World Cup victory in 2010 which brought me to name my son after football coach José Mourinho,” says Maurinho’s dad.

It makes sense, then, when his mom describes her son’s competitive nature. “When Maurinho says that he wants to achieve something, he will not back down until he gets it done. He’s been in the habit of wanting to be first since he was very small. When he started school, he was always the top of his class. When he plays with his peers, he tells them he wants to be the leader.”

Maurinho’s father agrees but then describes his son’s challenge. “He does everything that he wants to until he starts to feel pain in his legs. That’s when he realizes that he’s limited.”

Maurinho’s bowed legs started at an early age and gradually worsened as the years passed. But he didn’t let anything, including misshapen legs, stop him from doing what he wanted. “Maurinho loves soccer more than anything else. If people are playing soccer somewhere, no matter what you say, he will spend his time watching the game,” says his mom. “When the soccer match is over, he will come home and maybe take his slate or chalkboard and ask me to read and correct him if it’s not right. He loves soccer and studying.”

Maurinho was three years old when his parents took him for treatment at a local hospital. There, doctors put casts on his legs in an attempt to reshape them. “But the efforts went nowhere,” his mom remembers. “Instead of providing relief, it brought him more pain.” They had no choice but to keep him home from school that year.

“Then, a few years later, I heard that the people of Mercy Ships had come,” his dad says. “That’s when we came to get help for our son.”

Maurinho’s condition qualified for free surgery onboard the Africa Mercy – and, coincidentally, he was the first ortho patient scheduled. The medical team on the wards didn’t know it yet, but they were about to see what this six-year-old was made of. “Every year, the first few patients that come through set the tone for the wards. Each one’s own motivation really makes a big difference in whether they will push hard or just sit back. It’s amazing how God placed Maurinho in that first position, knowing his competitive spirit … and it was so good for the other kids to see,” says nurse Jenny Mullis.

After a successful surgery to correct the bend in both legs, Maurinho was gently awakened by his mom. When he saw his casted legs, he couldn’t believe his eyes. “Mama, my legs are completely straight!” Maurinho told her, not understanding how it had happened while he was sleeping.

“He didn’t let the other kids see fear because he realized there was no reason to be afraid,” his mom explains.

Daily the ortho patients would walk – with casts on – to strengthen their legs. Down the hallway they’d go, relying on crutches and walkers to make the slow trek. But Maurinho’s plan was different. He made sure to grab and maintain first position in the line, pushing past the others. When the group reached the end of the hallway and reversed direction, Maurinho was no longer in first … but it didn’t last long. “He can get going on those crutches pretty fast if he needs to regain his lead in the hall! With bent legs, he used to be slow. Now he refuses to be the one left behind!” says nurse Nicole Lukens.

When the time came for the casts to be changed, a harmless tool was used to cut through the hard, white plaster. At the sight and sound of the whizzing machine, most kids are frightened. But not Maurinho. He watched carefully, more intrigued and excited than anything. To see his straightened legs for the first time was like unwrapping a long-awaited gift. When the therapist gave the signal, he pulled back the hard pieces and peeled away the remaining gauze. His face was sheer amazement – and full-on determination. These new legs were straight – but not yet strong. He was ready to put them through the necessary training with an end-game in mind.

Weeks passed as Maurinho continued physical therapy while recovering at the Mercy Ships outpatient center. On one particular day, he was seen playing football with the other kids! As usual, he had turned his limitations into an advantage, using casted legs and crutches as extra power to control and drive the ball. He could practically fly!

When it was Maurinho’s turn to get his casts off for good, x-rays unfortunately said otherwise. He needed a few more weeks to heal because of how extreme his case had been. This didn’t compute for Maurinho. It was then, for a moment, that defeat set in. He fought back hard, but a few large tears escaped and ran down his disappointed face. But the momentary discouragement passed, and determination returned as he accepted the new casts – for what he hoped would be the last time.

A few weeks more, and the wait was over. The casts came off – for good! Maurinho couldn’t wait to stand on his new straight legs and start walking. They were weak, but ready. He took the first steps with a concentrated smile. After only a few sessions, physical therapist Stefanie Neeb chimed, “He is doing his best already! He is very eager.”

Maurinho’s progress continued until he was given a clean bill of health. Mom was ready for the news. “I’m so happy! His legs are now straight, and he is doing fine. We are going home today!”

Maurinho is now thriving at home. He’s running. He’s climbing. And of course, he’s kicking a football around whenever he can. His mom spoke to the school principle to enroll Maurinho back into classes. In typical fashion, her son wasted no time. “It was like he had started school with them from the beginning. He is already ahead of many classmates, and his teacher is very happy,” she says proudly of her son, whose examination scores have placed him second in his class.

Think he’ll push his way to first? He probably already has.