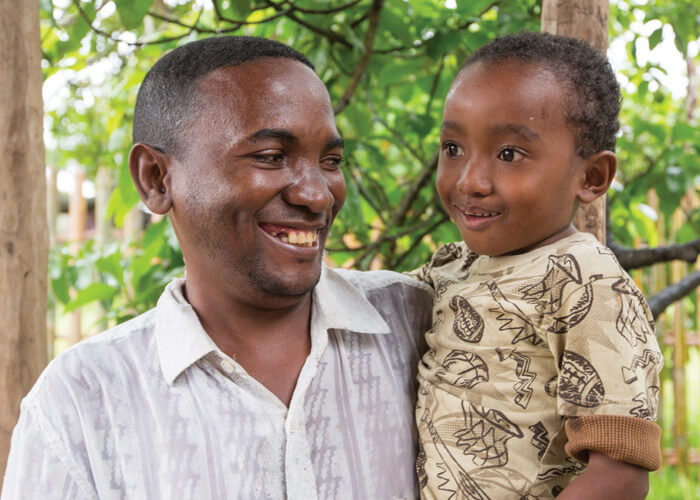 William patiently waits as the bandages from his right eye are removed. The 29-year-old sits perfectly still as his eye is wiped clean. He slowly opens his eye as everyone in the room, including his wife and five-year-old son, wait with bated breath. Silently everyone wonders the same thing:  “Did the surgery restore William’s vision?”

Three years earlier William could see just fine. He owned his own business – selling clothes in the local markets. His home life flourished with his wife and a two-year-old son. And then William began experiencing trouble with his vision. At first, cloudiness developed over his right eye. Eventually William could only see shadows. A few months later the same thing occurred in his left eye. William could no longer distinguish one person from the next. He could no longer work.

Limited by his disability, William stayed home and contributed by making the meals. His wife, Elisa, worked as the sole provider in their home. At the age of three, his son Unida shouldered the responsibility of being his father’s eyes. Unida would make change at the markets, hail down transport and warn his father of objects in his path. The burdens placed on his wife and son overwhelmed William, who wanted to provide for his family and lead his home.

William searched for a cure for a full year. Finally, a physician diagnosed him with diabetes, a condition that affects how the body processes sugar. The damaging effects include the development of cataracts – as in William’s case. Insulin brought William’s diabetes under control, but it could not remove the cataracts.

Local ophthalmologists examined William’s eyes and gave him heartbreaking news – they could remove the cataracts, but the surgery would be very expensive. A surgery would cost William 600,000 ariary (the equivalent of $240 US) per eye. The news devastated William. Without work, how would he ever afford such a costly surgery? The average income in Madagascar is $260 per year (www.wildmadagascar.org).

William was desperate. Then he heard the announcement that Mercy Ships was offering cataract removal surgeries at their eye clinic – at no cost.

As soon as he heard the news, William traveled to the Mercy Ships land-based eye clinic. Dr. Ralph Crew, a volunteer ophthalmic surgeon from the United States, evaluated William’s eyes and approved him for surgery within 48 hours. William rejoiced. He eagerly anticipated his sight returning even before he was admitted for his operation. “Me personally, I am sure. I believe that as soon as they will take it (the bandage) off, I will see!” he said.

Twenty-four hours after William’s simple 20-minute surgery, the Mercy Ships eye team and William’s wife and son gathered together to witness the results. The outcome was evident within seconds. Once the bandages were removed, William’s surgically repaired eye adjusted to the light. He looked around the room, and his eyes rested on his son, his guide for the last two years – a son he had not been able to see.

William flashed a big smile before saying, “I can see my son!”

A mixture of cheers and cries exploded throughout the room. An eye test later revealed that not only could William see, he could see incredibly well – just as he said he would. One 20- minute surgery made possible by donors and volunteers from around the world, along with William’s faith, restored one home in Madagascar.